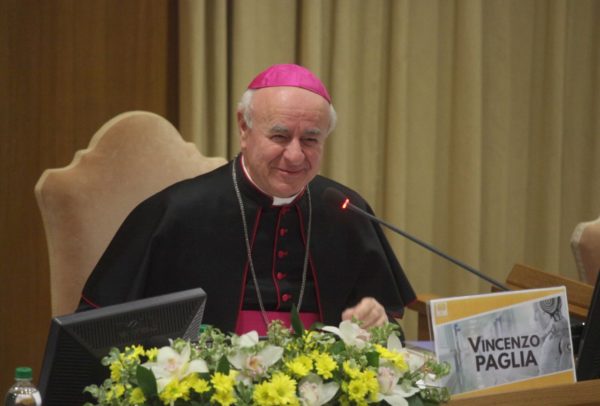 Please accept my most cordial welcome to this time of reflection and exchange about a question that is extremely relevant today and looks in a new way at what has always been at the center of the mission of the Pontifical Academy of Life throughout its twenty-five years of activity, that is, the defense and promotion of the life of the human person.  To carry out its task ever more effectively and more thoroughly, it must examine that task within today’s historical context.  The Pope told us this clearly in the letter he wrote us on the occasion of our anniversary—it is not appropriate to consider in a way that is isolated and separated from the complex of factors that condition them the situations that threaten human life.  Precisely because it is human life that we are interested in, we must take into account the dense network of relationships within which it develops, which in our globalized world are profoundly influenced by new techno-science developments.

These new elements not only help us carry out the specific elements of our activities, they also change the way in which we relate among ourselves and with the world.   With the advent of the digital world, we tend to turn every phenomenon into numerical data and to process it on the basis of the calculations it can be subject to.  This reduction of the real world to information technology not only introduces a new cognitive approach to reality, but also a new framework that shapes relationships and decisional processes.

Interacting with artificial devices that influence social organization and relationships, as well as making decisions based on the automatic processing of correlations and projections, is already part of our present lifestyle.  However, this development, known as the “digital turn,” is due not simply to the pervasiveness of these mediations of human knowledge and action.  Rather, what principally triggered change is the precision and reliability of cyber-tools that surpass the limits of human perception, sensitivity, consciousness and reasoning.  Thus, it becomes possible to substitute human evaluative and decision-making functions with effects that themselves have a profound effect on humanity.  That way, technology, understood and recommended as a way to facilitate and strengthen the instrumentalities available to humans, could rather lead people to abandon their role as a rational agent who use applications and move toward voluntary compliance with automatic procedures suggested by a given program.

If on one hand work is in progress to enhance human capabilities using technologies that intervene deeply within the body—at the level of genes and neurons—on the other hand, we must recognize the risk that humanity will no longer have its hands on the levers of technological power. The desire for “anthropomorphic robotics,” whereby the rapid progress in the digital world has produced so-called “artificial intelligence,” reveals the lack of clarity in these uncharted areas in which we find ourselves—we are completely unprepared for the extraordinary power of the technology, even though it is product of human desire and intelligence.  The human condition is to be both historically conditioned and also entrusted to one’s own resources in a conscious and responsible way.  Even though man cannot control his own reality, he is nevertheless called to be concerned for it, in his own interest and for the sake of others, using the tools that he himself can invent and use.  This understanding shows us what our task is.  To ensure that technology is human, we must be human ourselves.  And to be human we must maintain the control exercised by human intelligence—and by human consciousness, sensitivity, analysis and decision – over the essence of humanity.  To avoid “a Faustian bargain” coming out of our technological handiwork, we must be determined not to “sell our souls”—not even to gain bodily immortality, because our bodies without our souls, no matter how beautiful and efficient, would be horrible monsters.

In this regard, we are truly aware of the fact that in this new borderland it is the technology leaders who send us strong and relevant signals about the need for anthropological reflection and ethical reasoning that are equal to the challenge.  Algorithms are not as governable as previously thought, because they are not at all as reasonable as thought or as anchored in a human body, which is an indispensable condition for human mental functions, as the cognitive sciences tell us clearly, when interpreted in a non-reductionist way.  The management of big data is not just a valuable accumulation of information that, properly processed, flows for the benefit of everyone.  It is also a corruptible collection of correlations that do not know us, and therefore exclude us.  We still know very little about the psychic remodeling produced by new technologies that intervene at genetic, reproductive, neuronal and organic levels (We have scarcely begun to analyze the consequences for language, relationships, affections and anguish of the pervasive use of smartphones, but we are aware that they can produce results analogous to those of psychotropic drugs).  Not to mention the effects of social selection and exclusion, of the organization of labor and the economy, the transformation of the structures of education and socialization, of the formation of ethical and political consensus, of the humanization of activities of personal care mediation, of learning processes.

We are therefore grateful for the intellectual loyalty of the many experts who tell us with seriousness and with appropriate concern about the need to jolt our conscience and sense of responsibility to strengthen the resources of soul required by the force of this challenge—directing the extraordinary resources of human intelligence, created by God precisely for this purpose, to the regulation of technology for the good of the entire polis (Plato rightly says that the art of human government of human capabilities is the basiliké techné, the royal skill that draws on the wisdom of the soul, not on wealth or war, and makes us the “lords” and not the “slaves” of all other skills).  This is precisely the uniquely human task of reason and sensitivity.  No machine, however sophisticated in simulating and enhancing the capacity for calculation and for perceiving reality, can take on this task.  And it is only our descendants who will inherit our human capabilities.

2. A new alliance between humanism and technology

Even as we express our admiration for the sensitivity that technologists themselves show towards the problem we are facing, we also accept the implicit—but often also explicit—appeal to a new alliance between humanism and technology (which is also new, of course).  The categories and notions, though worthy of respect, that we have acquired and refined in the past are no longer adequate.  At the same time, we are led to a passionate questioning of the legacy of history and of human wisdom, because human competence is formed in a human context.  Behind the vicissitudes of language and theories, human competence about humanity is transmitted from generation to generation.  The tools of culture are different, but the humanity of history is something that is shared.  Roles are different but affections are shared.  Keeping one’s word and the rightness of caring for one’s children are, always and forever, simply human.  Their violation is a disgrace that only humans can understand and suffer.  No cognition, no evaluation, no decision, on this, can be inherited by a machine, calculated by an algorithm, or produced by genetics.  Replacing our senses makes no sense if we think that by doing so, we can entrust to machines the human dimension of sensitivity and the logic of our deepest and dearest affections.  There are not, and should not be, machines for prayer and for invocation, for gift and forgiveness, for happiness and human compassion.  The many, ineffable, inalienable, parts of humanity that technology has no right to inherit must learn to understand each other and live—individually and societally—in a state of lordship over the instrumental mediation exercised by algorithms and machines.  Without hesitation or disrespect, without subjection, without contempt. We will be neither apocalyptic nor complaisant.  We could, of course, become so if we think we must compete with instruments that our intelligence and our creativity have produced, or is we think we must yield to them, instead of giving them their proper place.  The inventors of machines are, even if they forget it, human.  The users of machines and the lords of their services are human, even when they let themselves be deceived and renounce the dignity of their nature.  We will not compare ourselves with machines, no matter how much they resemble us, or let them frighten or confuse us.  We will reason with other humans, about machines and not with machines, but we will always find appropriate and prudent ways to work with machines.  And we won’t forget the wise and very human principle that believers follow in order to avoid creating wars of religion among humans with respect to the insidious powers of every kind struggle for their souls: “For our struggle is not with flesh and blood but with the principalities, with the powers, with the world rulers of this present darkness, with the evil spirits in the heavens.” (Eph. 6:12).  To be up to this challenge, and reestablish the mental and social framework of a “noble” and “shared” humanism, the witness of our faith, according to which the world, with all its resources and possibilities, is entrusted to the sensibility and to the intellect of love of man and woman, in order that they can increase its resources and transmit its riches from generation to generation, relies heavily on the word of faith regarding our final destiny.  We believe firmly that the grace of the lordship of Jesus Christ, dead and risen, in whom all things were created, opens the way to a resurrected creation, in which our struggle against the powers that work to subjugate humanity and corrupt the earth, will be redeemed, honored, and joyfully given peace.

It is precisely here that the responsible commitment of our intelligence and our human sensibility is rooted, whose purpose, from the beginning, is to guarantee for the whole community of peoples a protection of human life that is worthy of its human quality.  By its nature, human life is worthy of this passion and compassion, from its beginning to its end, however vulnerable and fallible, wounded and degraded.  Technology that puts itself at the service of the care for life, refusing to discard it when it does not meet standards of efficiency and wellbeing decided by a machine, is a real blessing. When technology takes power, with our passive complicity, we ourselves become responsible for the loss of that blessing.  We must be lords of technology, at the service of life; and not masters of life, subject to technology.  This is the covenant that we must seal.  The complexity of this discernment is certainly real.  It requires a period of careful and open listening and critical understanding of the phenomena that surround us.  The tools that we have are, all in all, not very sophisticated or dependable.  Scientific research is an irreplaceable part of this covenant.  The hidden pitfall in new technological resources is the great extent of their invisibility. They cannot be perceived physically or mentally by individuals or by the community.  They are not large and impressive machines.  They are virtual relationships and the results of calculations.  Even before they establish connections between humans, these devices connect with each other.

Artificial intelligences, algorithms that can learn, so-called machine learning, and other cognitive computer systems are the vehicles of this revolution.  These systems are spreading more and more to every area of our life as in the past steam and electricity changed the way we carried out all our activities. For this reason, closely connected with this meeting, artificial intelligence will be the theme of next year’s workshop.  We want to approach this new frontier forcefully and passionately, with as much wide cooperation as possible.  To honor, with science and conscience, the task that has been authoritatively entrusted to us.