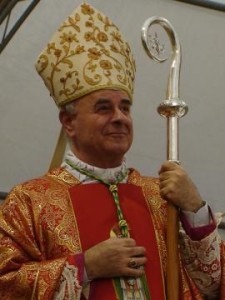 Vincenzo Paglia was born in Boville Ernica, (Frosinone, Italy) on 21 April, 1945, and obtained the degree in theology and philosophy from the Lateran University and another one in pedagogy from the University of Urbino.
He was ordained as priest on 15 March, 1970, and from 1981 to 2000 served as parish priest in the Basilica of Santa Maria in Trastevere in Rome; he was also the ecclesiastical assistant of the Community of Sant’Egidio and was the postulator of the cause of beatification of the Archbishop of San Salvador, Oscar Arnulfo Romero.
On 2 April 2000 he was ordained as Bishop of Terni Narni Amelia in the Cathedral of St. John Lateran. From 2002 to 2014, he was president of the International Catholic Biblical Federation and, from 2004 to 2009, he was also chairman of the Commission Ecumenism and Dialogue of the Italian Episcopal Conference. Since 2019 he is president of Family International Monitor.
He has played an important role in the dialogue between the Vatican and the Russian and Romanian Orthodox Church, and followed with particular care the situation in the Balkans. He was the first priest to receive the permission to enter Albania before the free elections in March 1991. He was a member of the Pontifical Delegation for the first Pastoral Visit in Albania and, as such, obtained the reopening of the seminary and the restitution of the Cathedral of Scutari. His action was particularly intense in matters concerning the Kosovo, where he succeeded in reaching the only agreement between Milosevic and Rugova for the standardization of the school-education system in the region and obtaining the release of Rugova during the war of 1999.

For his work in peace he received, in 1999, the UNESCO’s Gandhi Medal in 2003 the Mother Teresa Prize of Albanian Government. He also received the Ibrahim Rugova award from the Kosovo government and the “Noble Amigo” award from the Government of El Salvador, the San Valentino d’oro, the Premio per il Dialogo Città di Orvieto, as well as the Grinzane Terra d’Otranto and “Ernest Hemingway Lignano Sabbiadoro” prizes, and from Patriarch Alexis the award for the Third Century of Saint Daniel Prince of Moscow.

He has collaborated with the Department of Contemporary History at the Sapienza University of Rome and has published studies and articles on the social and religious history as well as on the history of poverty.
On 26 June 2012, Pope Benedict XVI elevated him to the dignity of archbishop and appointed him president of the Pontifical Council for the Family.

He is the founder of People and Religioni – Terni Film Festival.

On february 2019 promoted “Rome Call” about ethics and artificial intelligence.