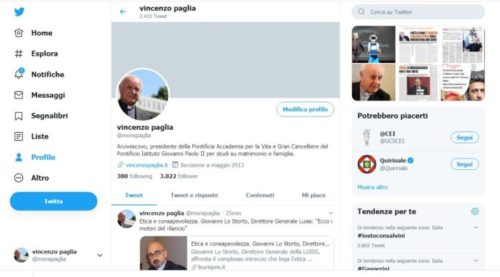 Regarding the controversies about “Casomai” poster

Regarding the controversies generated by the publication, via Tweeter account of the Pontifical John Paul II Theological Institute for the Sciences of Marriage and the Family, containing a poster of the film Casomai by Alessandro D’Alatri aiming at promotion of an episode of the Adesso in onda il Gp2  program, the following shall be noted:

All the social network accounts linked to the name of Vincenzo Paglia (Facebook, Twitter, Google, Youtube, etc.) concern exclusively institutional activities and are managed by the Press Office of the Pontifical John Paul II Institute..

None of these profiles are managed directly by Monsignor Paglia which is evident by the style of the posts as none of them, nor the tweets, are written in the first person, while the activities of the archbishop are almost always spoken about in the third person.

The profiles are managed independently by the Press Office; the posts and tweets are not agreed with Monsignor Paglia beforehand, and for this reason they never contain comments, thoughts or personal considerations of Monsignor Paglia, but only pieces of text taken from the official Vincenzopaglia.it website, articles and interviews that directly concern the Archbishop (and never other topics) and re-tweets of Institutions linked to the same Monsignor Paglia, such as the John Paul II Institute, the Pontifical Academy for Life, the Community of Sant’Egidio, the Family International Monitor, the Popoli e Religioni film festival.

More specifically, the re-tweet of the Casomai film poster was used by the Press Office as part of the institutional activity of the John Paul II Institute of which Monsignor Paglia is the Grand Chancellor, and it was done without having informed the Archbishop in advance.

Hence, the decision to publish this picture shall not, in any way, be attributed to the person of Vincenzo Paglia; any particular meaning it was given, apart from being questionable regarding the merits, is also completely unfounded.

It should also be noted that the tweet on the Casomai poster has been linked, in all the articles published on this subject, to the painting by Ricardo Cinalli on the counter-facade of the Cathedral of Terni, commissioned by Monsignor Paglia in 2007 and that is the subject of an old controversy related to the nudity of many characters, and to the accusation of “homoeresia.”

Regarding this other absurd controversy, it should be noted that, first of all, the Cathedral of Terni is certainly not the only church in the world in which naked bodies are portrayed; it is enough to recall the Sistine Chapel and Michelangelo’s paintings (indeed, became the subject to censorship, but five hundred years ago).

Secondly, there is absolutely nothing “homoerotic” in this painting. It is a traditional representation of the Last Judgment, with the Heavenly Jerusalem above, lost souls below and Christ, in the center, holding two fishing nets full of souls which will be taken to Heaven.

There is no element that could justify the claim that “Christ calls homosexuals, prostitutes, drug dealers to Heaven” if it was not for the random statements and other works by the same artist that in no way should be related to that of Terni.

Reading this paining as homoerotic is, therefore, as morbid, groundless and instrumental as the “pedophile” one of the Casomai poster.

Finally, it should be noted that, contrary to what has been reported by various media, the controversial tweet was not removed from the profile of Vincenzo Paglia or from that of the John Paul II Institute, and is still visible as the evidence of the total groundlessness of this controversy.