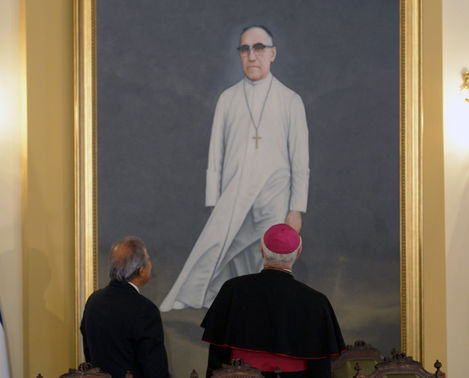 We are gathered today around the altar of the Lord to commemorate the centenary of the birth of Blessed Oscar Arnulfo Romero.  Today, all of us here, together with others in El Salvador and in other parts of the world, remember this shepherd for his Gospel witness that brings light to believers and non-believers alike.  On that long ago August 15, 1917, God chose the child born that day for a great mission:  to prepare the hearts of his fellow countrymen to welcome the Gospel of his Son.  As often happens with prophets, Romero paid with life.  His birth, his life, and especially his death were all focused on Jesus.  He made his own the words that Paul wrote to the Romans: “What will separate us from the love of Christ?  Will anguish, or distress, or persecution, or famine, or nakedness, or peril, or the sword?…For I am convinced that neither neither death, nor life … nor other creature will be able to separate us from the love of God…. ” (Rm 8:35, 39). The last years of his pastoral life were guided by those exact words.  Pope Francis has made it clear that Romero was persecuted even after his death with the opposition to his beatification that many persons mounted.  But when May 25 last year finally came, more than sixty thousand people gathered around the altar to thank the Lord for sending this shepherd.  And I’ll never forget the emotion of that day.  At his tomb, many, just as when he was alive, spoke to him because they felt he was still with them!

Today, on the centenary of his birth, we remember him yet.  And we do so beginning with the day he entered Heaven.  It was on March 24, 1980, that he was assassinated at the altar just after his homily nd while he was preparing the gifts at the Offertory.  They silenced him with a single shot to the heart, but now he speaks to us even more clearly.  His death is written in the heart of the Twentieth Century Church.  In ages past, only two other bishops met the same fate:  St. Stanislaus, Bishop of Kraków, and St. Thomas à Becket, Archbishop of Canterbury.

I myself remember the emotion of St. John Paul II when he heard that Romero had been assassinated.  And when, at the Celebration for New Martyrs during the Great Jubilee of the Year Two Thousand, he saw that Romero’s name had been left out—that’s how strong Curia opposition was—the Pope added it, writing that Romero was an example of the Shepherd who lays down his life for his flock.  And today, Romero’s death continues to speak to us in the martyrdoms of the many priests in the Middle East who have been assassinated while celebrating Sunday Mass.  Romero was the first in this long line heros who died for Christ in the Twentieth Century, in the New Millennium.  And with him, let us remember all the Christians who continue to bear witness to the Gospel even unto the shedding of their blood.

Keeping alive the memory of Romero is a noble task, and my great hope is that Pope Francis will soon canonize him—a Saint!  Over the years, we insisted on Romero being recognized as a martyr.  The essence of his holiness was his following the Lord by giving himself completely for his people.  But let’s be realistic, Romero was not a Superman. He was afraid of dying, and he confessed that to his friends on a number of occasions.  But he loved Jesus and his flock more than he loved life.  This is the meaning of martyrdom.  Love for Jesus and the poor is greater than love for oneself.  This is the power of Romero’s message.  A simple believer, if overwhelmed by love, becomes strong, unbeatable.  Several times, to shut him up, he was threatened with death, but Romero, following the Good Shepherd who gave His life for His sheep, would not shut up; and when he was advised, even by Rome, to leave the country because the threats had become more direct, he replied: “The shepherd never leaves his sheep, especially not when then they are in danger.”

And today Romero repeats in Heaven the prayer of Jesus at the Last Supper: “When I was with them, I protected them in your name … and guarded them…” (Jn 17:12)  Romero died to save his people, to save them from the violence of injustice.  I believe that the verse I just quoted was one that Romero often meditated on, just as he meditated on other passages that speak of giving one’s life to protect the flock, and before he preached this message to others, he preached it to himself, and he chose to be like Jesus, giving his life for his flock.  For this reason, he could not, just to save himself, keep silent in the face of the injustices suffered by the powerless.   He began to denounce them publicly.  He did not shirk before the forces of power, and he found his power in the love that Christ has for the poor.  It was the Gospel that led him, it was the Magisterium of Vatican II and of the Latin American Church with its preferential option for the poor.  Those who were oppressing the poor did not like the Church that Romero exemplified.  Indeed, they believed it to be a politicized Church.  Romero chose to be faithful to the Church presented by the Council.  He became a forceful witness of its love for the poor, and he gave his life at the altar in union with Christ Himself—victim and priest at the same time.  A nun who was at that Mass and who saw Romero die before he raised the bread and wine to Heaven, told me, “that day I thought Romero was, like Jesus, both victim and priest.”

The Martyr’s death that Romero suffered is his most precious gift to us.  That gift is especially precious in our days, and the people know it.  That’s why his testimony continues to be welcomed all over the world.  Yes, dear sisters and dear brothers, in a world where self-love and self preservation are supreme values, where we protect ourselves from others by raising building walls and barriers both in our hearts and in our relationships, Romero’s example is a shining beacon, a light that delivers individuals and peoples from the darkness of egoism.  Romero is speaking to us, and I can hear the echo of his last Sunday homily: “In the name of God, and in the name of this suffering people, I beg you, I beseech you; I order you in the name of God—stop the repression.”  There is too much violence in the world, there is so much violence in El Salvador, where gangs continue to bloody the country.  There is violence in too many countries in the world; too many wars; Hunger is too widespread and there is too much injustice to number.  Ours is a world of indifference that lets evil reap its harvest of innocent souls, young and old..  There is too much terrorist violence that sows death and fear.  Today, Romero asks the whole world to stop the violence, stop the killing.

Dear sisters and dear brothers, we need a real conversion away from fear, indifference, superficiality, just as Archbishop Romero was converted when he lived through the death of Father Rutilio Grande with his two peasant friends.  Romero became a defender of the poor, and we too are asked to leave behind a Christianity that is just habit and self-reference. Today, in our own world, we need a Gospel Christianity that knows how to witness love for everyone, especially for the poor, a Christianity that inspires us to give our life for others.  Romero did not think of himself, did not defend himself, did not spare himself.  Romero followed Jesus who gave his life for others. This was his witness.  He witnessed a Gospel and a Church that “goes out” to save everyone, no one excluded.  It is the Church of the Second Vatican Council that Blessed Paul VI compared to the Good Samaritan who bends down before the hurts of today’s humanity.  Romero is a martyr who exemplifies the Church that Vatican II wanted—a martyr of the Church of Vatican II.  And Pope Francis is not just a defender of that Church.  With Romero in the Heaven and with Francis on the Throne of Peter, the Church goes out of itself and becomes a Good Samaritan in the world.  We needed a Latin American Pope before Romero could be raised to the honors of the altar.  I remember the  words that Pope Francis said to me when we met on the first day of his Papal Ministry, March 19, 2013. He asked: “How is the cause of beatification of Archbishop Romero doing? ”

Romero believed in the missionary power of the Council.  In a homily at the funeral of a priest killed by death squads, he said that Vatican Council II calls on all Christians today to be martyrs, that is, to give their lives to Jesus and the poor. “Some, he said, the Lord asks to shed their blood, as He did to this priest, but he asks all to give their life for others, to be martyrs.” He gave another example, that of a mother who conceives a child, carries it in her womb, gives it birth, nourishes it, cares for it.  Romero said, “This mother is a martyr because she is giving her life for her child..”  Dear sisters and dear brothers, martyrdom—giving one’s life—is the only way to follow the Gospel in our time.  We can not be disciples who act only out of habit and are thinking only of ourselves.  That is not Gospel joy.  Romero reminds us of the teaching of Jesus that was quoted by the Apostle Paul: “There is more joy in giving than in receiving” (Acts 20:35).  Indeed, martyrdom, giving one’s life for others, is the only way to follow Jesus and the only way to be truly blessed.