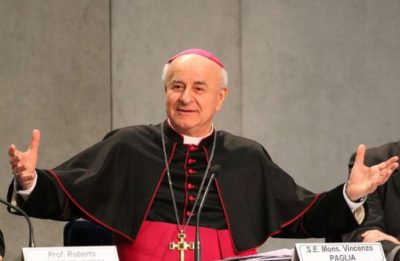 ROME – Pope Francis is not the only one criticizing the separation of children from their families at the U.S.-Mexico border, with the head of the Vatican’s think tank on bioethics joining the U.S. bishops in condemning what he called “myopic politics.”

The plight of immigrants, said Italian Archbishop Vincenzo Paglia, president of the Pontifical Academy for Life, “is often forgotten,” and “shortsightedness regarding these questions risks hurting everyone.”

Paglia made these remarks during a roundtable meeting with foreign press in Rome June 19, just ahead of a Global Conference on Bioethics that will be taking place at the Vatican June 25-27, titled “Equal Beginnings: But Then? A Global Responsibility.”

Asked directly about President Donald Trump’s policy to hold immigrants attempting to cross the border illegally in jail while their children are kept in holding facilities, Paglia took the part of First Lady Melania Trump.

“Melania (Trump) has already said it, it’s hard to be clearer than that,” the archbishop said, adding his personal support “for the right of the human family to inhabit the entire planet.”

The First Lady recently told CNN that “she hates to see children separated from their families,” and expressed hope that the U.S. will be “a country that follows all laws, but also a country that governs with heart.”

Bishops in the U.S. have also voiced strong opposition to the policy, with the president of the episcopal conference, Houston Cardinal Daniel DiNardo, calling it “immoral” during their bi-annual meeting last week.

In a new interview with Reuters, Francis voiced support for the statements made by the U.S. bishops this month.

“Let it be clear that in these things, I respect (the position of) the bishops’ conference,” the pope said.

The Vatican Academy’s concern for immigration is a new shift for the think tank, which in the past focused more on medical and health care issues concerning pre-natal and end-of-life bioethics. This change, Paglia explained, is part of a 360-degree approach to life that the academy wishes to incorporate under Francis.

The pope is expected to make a speech opening the assembly next week where he will offer guidelines for reflection.

“It will be a discussion with the theme of an understanding of life in all its aspects,” Paglia said, adding that this outlook presents “a pretty large horizon that shows a widening of the scope of our academy.”

From the hour-long informal conversation with the archbishop, three main aspects appear to undergird this “Academy for Life 2.0.” First is a global understanding of life, encompassing the fetus in the womb, the immigrant on a vessel, the pensionless elderly, the terminally ill and the exploitation of the environment.

“We must broaden our horizons so as not to forget anyone,” Paglia said.

This “broadening of the horizons,” representatives of the academy explained, does not mean that the classic bioethical concerns of the Catholic Church are not being looked after.

“The primacy is the human person,” said Italian Father Renzo Pegoraro, vice president of the academy, adding that it’s on this foundation that the health of humanity and the environment depend.

Another important aspect is bundling the usual “No” with a more positive “Yes.” To take a practical example, instead of merely condemning euthanasia, the academy also proposes an accompaniment of the sick and the need to improve palliative care.

“Today the academy is called not to live in a separate world dispensing judgment,” Paglia said, but rather to engage in a “continuous dialogue” with an ever-changing society.

Another key element is combining the academy’s usual work, which is to offer reflection and research on pressing issues regarding life, with practical actions. This action takes a dual form, Pegoraro explained, with the cooperation of Francis to elevate these topics on the global agenda as well as collaboration with NGOs and international associations.

“What Pope Francis underlines very robustly is that life must be understood globally,” Paglia said.

The summit will witness the participation of over 130 academics and experts from different fields and from all over the world, including a section dedicated to young researchers, under 35, bringing the tally up to 200 people.

While members of the academy remain for the most part European (57 percent), mainly Italian, there is also a notable percentage of North Americans (13 percent) and Central and South Americans (15 percent). The rest are from Oceania, Asia and Africa.

Despite its large representation in the academy, Europe is increasingly embracing a secularized approach toward bioethics. Ireland’s referendum to amend the Constitution in order to remove the ban on abortion, was voted for by the majority of the country.

Ireland, once a stronghold of Catholicism in Europe, has grown in its mistrust of the Church after the sexual abuse scandals starting in the late ’80s. Francis will be visiting the island in August for the World Meeting of Families, the first papal trip to the country since 1979.

“I was the one who chose Dublin for the World Meeting of Families,” Paglia said, adding later while speaking to a small group of reporters that he was met with staunch resistance. “Ireland has suffered enormous changes, and I insisted so that the entire world would go there in a show of help and support.”

“I am still certain I have made the right choice,” he added.

The archbishop admitted that the history of the Church in Ireland is marked by “enormous issues,” but stated that he was not happy about the vote.

“Myself personally, and the Church, don’t believe that we have to help death’s dirty work,” Paglia said.

Inspired by Francis’s pastoral approach, the archbishop said that the Church must instead “triplicate the closeness, the affection and the love” for the women for whom having an abortion is always a “dramatic experience.”

“I don’t want for the law to help Pontius Pilate wash his hands,” he said.

Paglia insisted that now “we must be close to women during, before and after” pregnancy, describing this as what it really means to “work in favor of life.” This message, he added, is the same in Ireland, as it is in Italy and even Argentina, which has been preparing for a referendum on abortion.

Asked on whether the academy intends to discuss changes to Humanae Vitae, Paul VI’s controversial 1968 encyclical banning artificial contraception and promoting traditional family archetypes, Paglia replied that “it’s not on the agenda.”

“We have enormous problems to tackle, [that] are more important in certain aspects,” he said.

Finally, concerning the relationship between the academy and the Pontifical Council for Culture, led by Italian Cardinal Giancarlo Ravasi, the archbishop good-humoredly said that “like good brothers we get along,” following Francis’s leadership.

“If some plates fly… we will have to buy plastic ones!” he added jokingly.