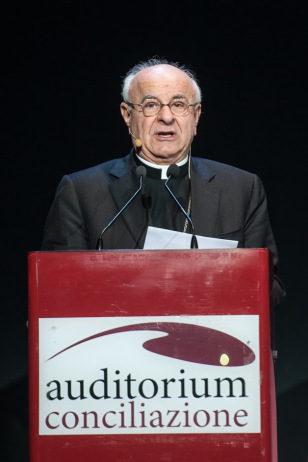 The principles of a new ethic for today’s technology and for artificial intelligence.

In Rome, in February, an Ethical Code for Artificial Intelligence was signed (read here). The initiative, which involved the Italian government, the FAO, Microsoft, IBM, was promoted by the Pontifical Academy for Life, whose president is Vincenzo Paglia. The young Rossella Avella interviewed him for the UCSI website, preceding his words with a piece of news related to the dramatic current events.

An artificial intelligence software for early warning able to detect positive cases of pneumonia from Covid-19 with a sensitivity of 98.5% was acquired for the first time in Europe by the Campus Bio-Medico University Hospital of Rome.

By combining the data provided by the artificial intelligence software with the positive swabs and other evidence provided by the symptoms, a correct diagnosis of Covid-19 can be achieved in 97% of cases. Starting from the analysis of the images of the pulmonary CT the artificial intelligence algorithm, elaborated in China starting from a base of 1000 clinical cases of patients with Covid19, is able to answer in just 20 seconds, compared to 15/20 minutes of human work. Once the case of Covid-19 lesion has been identified, the software automatically sends an alert to the radiologist’s position indicating the case as positive.

Artificial Intelligence is not only a medical technology, but it affects men, could it therefore threaten the effective exercise of freedom of choice in life?

“There is already a real risk that the man will be technologized, rather than the technology humanized. Skills which are properly human are hastily attributed to so-called ‘intelligent machines’. We must better understand what intelligence, conscience, emotionality, affective intentionality and autonomy of moral action mean in this context. Artificial devices that simulate human abilities are actually lacking human qualities. That must be taken into account to guide the regulation of their use, and research itself, towards a constructive and fair interaction between human beings and the most recent versions of machines”.

What ethic must be developed to have a real impact on technology?

“We must identify an interdisciplinary monitoring model for the shared search for ethics regarding the entire path in which the different skills intervene in the development of technological devices (research, design, production, distribution, individual and collective use). It is an indispensable mediation, given the ability of the Artificial Intelligence instrumentation to determine real forms of control and orientation of mental and relational habits, and not only to enhance cognitive and operational functions. It is a matter of elaborating a shared model that allows to examine from different points of view the predictable repercussions of each step taken in the process”.

Among the principles of the Ethical Code there is the “principle of non-discrimination” to prevent any form of discrimination among people, how can we ensure that these methodologies do not recreate and do not exacerbate these discriminations?

“Human activity in these sectors appears increasingly broken down into multiple elements that are not easily attributable to the control or will of individual subjects. This new modality in which personal action takes place in a structured context is particularly challenging for the medical and healthcare professions, which have as their object values as fundamental as those connected with corporeality and human life. Technological innovation is challenging us, as an Academy and as a Church; the Pontifical Academy thus begins to take a stand, and takes part in a historical and social context in profound and continuous transformation. Making ethical choices today means trying to turn progress into development. It means directing technology towards a humanism which is always focused on the dignity of the person and of the entire human family”.