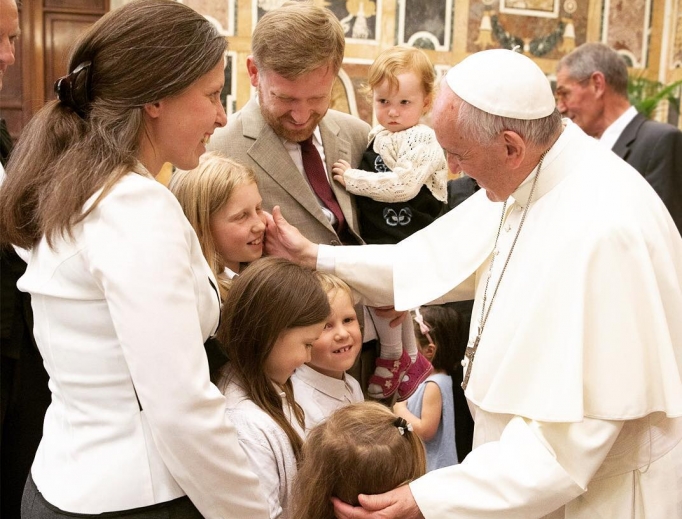 VATICAN CITY — On Tuesday, Pope Francis issued a new motu proprio changing the legal status of the John Paul II Institute for Marriage and Family, making it a theological institute charged with studying marriage and the family from a scientific perspective.

In the document, Francis noted that John Paul II made great strides in the area of the family, first of all with his 1980 Synod of Bishops on the topic and the subsequent publication of his post-synodal apostolic exhortation on the conclusions of the gathering, Familiaris Consortio (The Role of the Christian Family in the Modern World).

He then established the Pontifical John Paul II Institute for Marriage and Family in 1981 with the apostolic constitution Magnum Matrimonii Sacramentum in order develop the themes in his 1960 book Love and Responsibility, written when he was still Cardinal Wojtyla, and the theology of the body catechesis he developed while Pope.

“Since then it has developed a profitable work of theological and pastoral education both in its central headquarters in Rome and in the territorial sections, present on all continents,” Francis said.

While the institute’s main headquarters remains in Rome, it has campuses all over the world, including in Washington, D.C., Nigeria, Spain, Brazil, Mexico, India and South Korea, among others.

This path of development has continued, Francis said, with the recent 2014 and 2015 Synods of Bishops on the Family, which resulted in Pope Francis’ own apostolic exhortation Amoris Laetitia (The Joy of Love), published in 2015.

In the text, which was signed on the Sept. 8 feast of the Nativity of Mary, the Pope said that in light of the new challenges families today face and increasing cultural changes, he wanted to establish the new entity so that the work of the John Paul II Institute for Marriage and Family can be “better known and appreciated in its fruitfulness and relevance.”

Francis said this is why he chose to make it a theological institute with a scientific perspective, “expanding the field of interest, both in terms of the new dimensions of the pastoral task and the ecclesial mission, as well as in the development of human sciences and the anthropological culture in such a crucial field for the culture of life.”Composed of six articles, the motu proprio said the new John Paul II Theological Institute for the Sciences of Marriage and Family, linked to the Pontifical Lateran University, will officially “substitute” the prior entity, annulling the 1981 constitution that established it.

However, Francis stressed that “the original inspiration” that led to the founding of the original institute will “continue to fertilize the vast field of engagement” of the new entity, “effectively contributing to make it fully correspond to the modern needs of the pastoral mission of the Church.”

The motu proprio stated that the new institute will be a “center of academic reference” on matters of scientific interest regarding marriage and the family, particularly on topics “connected with the fundamental alliance of man and woman for the care of generation and of creation.”

The new institute will be tied to the Congregation for Catholic Education, the Pontifical Academy for Life, and the Dicastery for Laity, Family and Life. It will also be required to adapt its structures to offer the necessary personnel, professors, programs and administrative staff needed to carry out its new task.

Students who attend the institute will now be able to obtain various degrees, including a doctorate, licentiate or diploma in the sciences of marriage and family.

Although the statutes for the new institute still need to be defined, the leadership will remain the same and will continue to be headed by the institute’s grand chancellor, Archbishop Vincenzo Paglia, the chairman, Msgr. Pierangelo Sequeri, and the entity’s board of directors.

Until new statutes are in place, the theological institute will temporarily be governed by the norms under which the previous institute operated.

In a Sept. 19 press briefing on the motu proprio, Archbishop Paglia said the decision to establish a completely new entity was due to the importance of the family today.

The two key aspects of the new institute, he said, are that it is now “theological” and “scientific.”

By adding “sciences,” he said it gives the institute the ability to study and explore topics in the “entire realm of human studies,” including the sociological, anthropological and psychological view from a more scientific perspective.

He said Pope Francis’ 2015 post-synodal apostolic exhortation Amoris Laetitia will be new “magna carta” of sorts for the institute, noting that Chapter 2 of the document is dedicated to the social and anthropological aspects of the family, while Chapter 4 is dedicated to Scripture.

“The family, for Pope Francis, is not simply an abstract reality,” the archbishop said. “Families for Pope Francis are families who today must be helped and accompanied to rediscover their historical task, both in the Church and in society.”

Because of this, he said, there is a special link between the new motu proprio and the 2014 and 2015 synods.

In addition, he said faculty will not be cut, but rather expanded, bringing in new professors and experts, including those who aren’t Catholic, to discuss themes relevant to the sciences of marriage and family.

Because it is a scientific entity, and due to its link to the Pontifical Academy for Life, the institute “dialogues with everyone who reflects on this theme,” Archbishop Paglia said, adding that “it’s clear that the dialogue with those who aren’t Catholic must be done.”