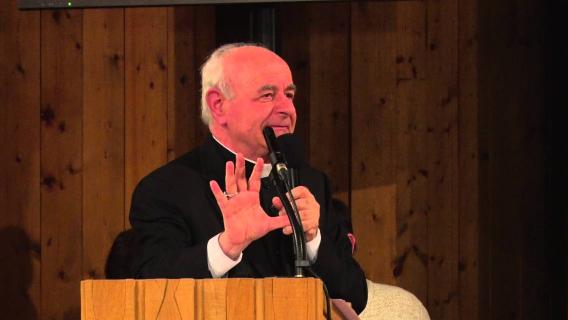 “Our No to abortion is at all stages”

Pope Francis has appointed 45 new ordinary members to the Pontifical Academy for Life. The replacement did not take place without controversy, due to inclusion among new members of an Anglican moralist theologian, Nigel Biggar, professor of moral and pastoral theology at Oxford. The day after the appointment, the Catholic Herald recalled a dialogue between Biggar and fellow philosopher, Peter Singer in 2011, during which the new member of the Academy for Life said,  “I would be inclined to draw the line for abortion at 18 weeks after conception, which is roughly about the earliest time when there is some evidence of brain activity, and therefore of consciousness”.

Vatican Insider has addressed some questions to Archbishop Vincenzo Paglia, who chairs the Academy. Why was Professor Biggar appointed?

“The nomination of Professor Biggar was directly recommended by the Primate of the Anglican Church, Archbishop of Canterbury, Justin Welby, who was recently asked to single out a representative. The controversy was born following the rediscover of a 2011 dialogue between Biggar and Peter Singer’s, who is renown for his permissible views on abortion, in which he says to be inclined to draw the line for abortion at 18 weeks after conception, in terms of – and I quote – “maintaining a strong social commitment to preserving human life in hindered forms, and in terms of not becoming too casual about killing human life”. This is certainly not my personal position, and much less the Academy. It should be added, however, that Biggar, whom we have contacted these days, has published nothing on the subject of abortion – Biggar’s academic focus is rather on end-of-life matters, “where he has a position that coincides with Catholicism – Biggar also assured that He does not intend to enter into the debate on this issue in the future.”

Did you know about that dialogue with Singer?

“No, I had no knowledge of that phrase said in an interview of 2011. But I would like to repeat that Biggar has never written anything on the subject of abortion.”

Does the refusal of abortion, at any stage of pregnancy, remain unchanged?

“Yes, of course. In the most certain way. It would be foolish to even think of a change. The Pontifical Academy for Life, as specified in the new Statute signed by Pope Francis, aims at ” promoting and defending human life and the dignity of the person” through research, training and education (Article 1 ). We are therefore serving and defending life, from the very first moment of its conception to the last breath. Nothing and no one will ever change this clear orientation. We will go everywhere to convince as many as possible. In this sense, the Academy is also called “to come out”. I would like to repeat that again: we will always be against every abortion practice. And we want to get more and more personalities involved in this battle. There is a need to broaden both the people and the battles: the big issues that mark our time must be addressed together, patiently earning the utmost possible consensus. The Academy – with all its old and new members, is determined to defend and promote human life at all stages and in any condition. Life is worthy per se.”

What meaning do the last appointments carry?

“The 45 academics nominated by Pope Francis are excellent scientists from 25 countries around the world and represent, to the maximum extent possible, the various disciplines that today need to converge to create a culture of life that responds to the great challenges of a globalized and hyper-technology world marked by inexhaustible inequalities. Several of the nominees had already been part of the Academy. To them, according to a precise statement by Pope Francis who asked me to foster “cordial and effective dialogue with other scientific institutes and academic centres, also in an ecumenical or interreligious setting, both of Christian inspiration and of other traditions and cultures” (August 15, 2016), some scientists from other Christian denominations or other religious and cultural traditions have been added: among them the Nobel Prize in Medicine, Shinya Yamanaka. The Pope has also appointed five honorary members representing the precious history of the Academy that should not be forgotten in this new season: the widow of Professor Lejeune, founder of the Academy; The Presidents emeritus (Cardinal Sgreccia, Professor Vial Correa, Monsignor Carrasco de Paula) and Cardinal Caffarra.

When will the new and younger members of the Academy be appointed?

“According to the Statute, the Governing Council, which will be appointed by the Pope in the next few days, oversees the appointment of the other two associations of academics. Within a few weeks I believe that the Academy – finally fully staffed – will be able to start its work. I am pleased there is a group of young researchers – a novelty wanted by Pope Francis – to help the growth of the new generations of scientists and scholars to deal with the great issues of life. ”

What are the Academy’s expectations after these appointments?

“We can finally work at full capacity! In these past months, we have already identified some particularly urgent issues present in our national newspapers. For example, the issue of the human genome, the brain-consciousness relationship, the end of life … We also inaugurated a world-wide project for palliative care – called PALLIFE – for which we have scheduled an important event next February in Rome preceded by regional meetings in the various continents. Our most important event, however, will be our General Assembly in Rome from October 5 to 7, which will be opened by Pope Francis, and whose theme is: “Accompanying life. New responsibilities in the technological era “. We are hoping next week to issue the whole program, which will include as usual, a moment open to the public, which I hope will be particularly numerous: Certain issues are decisive and we must face them together! ”