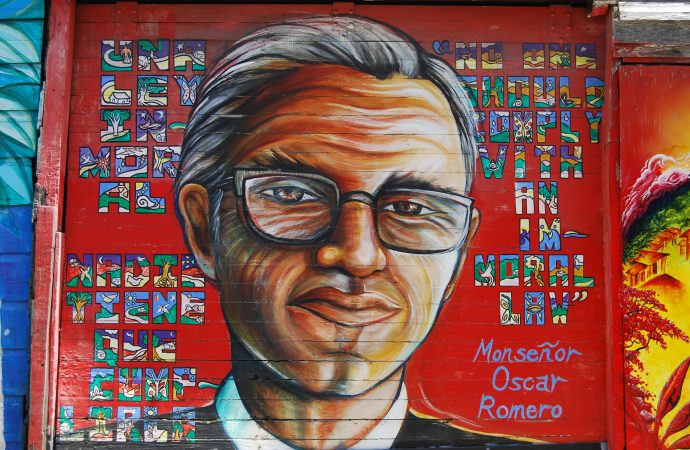 Champion of Romero’s sainthood cause: Today martyrdom is the only way to follow Jesus

ROME – In a homily celebrating the centenary of the birth of Blessed Oscar Romero, Italian Archbishop Vincenzo Paglia said that nowadays martyrdom “is the only way to follow Jesus and the only way to be truly blessed.”

Paglia, who is the president of the Vatican’s Academy for Life, said during the special Mass on August 12 that he hopes that the canonization cause succeeds.

“Keeping alive the memory of Romero is a noble task,” the archbishop told the faithful in St. George’s Cathedral in Southwark. “My great hope is that Pope Francis will soon canonize him-a Saint! Over the years, we insisted on Romero being recognized as a martyr.”

The archbishop is the postulator for the canonization of Romero, who is hailed as a champion of the poor, the oppressed, and Latin America’s liberation theology movement, who was shot to death in El Salvador in 1980 as he was celebrating Mass.

RELATED: Head of Vatican’s Academy of Life: Dialogue is love, not compromise

The recent reforms made by Pope Francis in his letter Maiorem hac dilectionem (Greater love than this) open up the door for the canonization of Romero. In it, the pope expanded the categories for sainthood to include those who were not martyred in the strict sense – killed in hatred for the faith – but who made an “offering of their life” (oblatio vitae) that led to their death.

In his homily, Paglia emphasized how the latter can easily be applied to Romero.

Romero “was afraid of dying, and he confessed that to his friends on a number of occasions. But he loved Jesus and his flock more than he loved life’” Paglia said. “This is the meaning of martyrdom. Love for Jesus and the poor is greater than love for oneself. This is the power of Romero’s message.

“A simple believer, if overwhelmed by love, becomes strong, unbeatable.”

During the Mass, Paglia paid homage to Romero and “his Gospel witness that brings light to believers and non-believers alike,” for which “As it often happens with prophets, Romero paid with life.

“Pope Francis has made it clear that Romero was persecuted even after his death with the opposition to his beatification that many persons mounted,” the archbishop continued.

RELATED: New method for declaring saints welcome in an age of Christian persecution

Pope Francis declared Romero a martyr in May 2016, but it was Emeritus Pope Benedict XVI who had lifted an informal block on Romero’s sainthood cause. Romero’s detractors maintained that his death didn’t meet the traditional test for martyrdom, but the block also reflected a certain ambivalence regarding liberation theology within the Church.

In his homily, Paglia remembered when Romero was declared a martyr and more than sixty thousand people visited his tomb and “many, just as when he was alive, spoke to him because they felt he was still with them!

“They silenced him with a single shot to the heart, but now he speaks to us even more clearly,” the archbishop said. “His death is written in the heart of the Twentieth Century Church.”

Paglia also said that Romero’s name was left out of the Celebration for New Martyrs during the Great Jubilee of 2000 due to the “strong Curia opposition” but that St. Pope John Paul II added it in, “writing that Romero was an example of the Shepherd who lays down his life for his flock.”

“Today, Romero’s death continues to speak to us in the martyrdoms of the many priests in the Middle East who have been assassinated while celebrating Sunday Mass,” he said. “Romero was the first in this long line heroes.”

Along with being a witness for modern-day Christians who face persecution – Paglia added – Romero also advocated for a Church that is committed to serving the less fortunate.

“He did not shirk before the forces of power, and he found his power in the love that Christ has for the poor,” he said. “It was the Gospel that led him, it was the Magisterium of Vatican II and of the Latin American Church with its preferential option for the poor.

“In a world where self-love and self preservation are supreme values, where we protect ourselves from others by raising walls and barriers both in our hearts and in our relationships, Romero’s example is a shining beacon, a light that delivers individuals and peoples from the darkness of egoism.”

The archbishop continued by listing the many examples of poverty, war, famine and terrorism around the word and insisted the necessity of having “a real conversion away from fear, indifference, superficiality.

Paglia depicted in his homily a hero who exemplified the Church that Vatican II wanted by reaching out to those in need, the poor, and being a witness to the Gospel in the face of injustice.

“With Romero in Heaven and with Francis on the Throne of Peter, the Church goes out of itself and becomes a Good Samaritan in the world,” he said, adding, “We needed a Latin American pope before Romero could be raised to the honors of the altar.”

Paglia concluded by reminding the faithful that being Christians cannot be limited to performing tasks out of habit and thinking only of personal interests. Today, Paglia said, “martyrdom-giving one’s life-is the only way to follow the Gospel.”