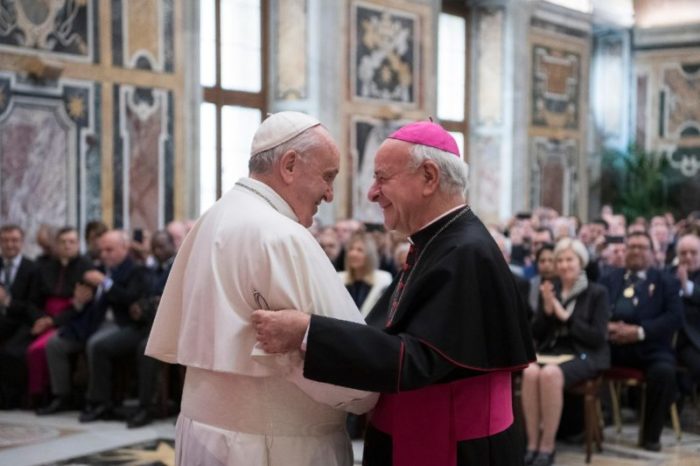 Abp. Paglia’s first appointment will be with students at Loyola Marymount University (Los Angeles) on September 3 and will focus on the theme of on Global Bioethics. During this meeting Abp. Paglia will outline the topics covered by Pope Francis in the Humana Communitas Letter, published last January to mark the 25th anniversary of the establishment of the Pontifical Academy for Life. In this text Pope Francis referred to the importance of addressing the unprecedented challenges posed by so called “emerging and convergent” technologies (ICTs, biotechnology, nanotechnology, robotics). Recent advances in physics, genetics and neuroscience have made profound interventions in human life possible. The human body is also susceptible to such intervention, which can change in the way it works, as individuals and in the society as a whole (Humana Communitas,  paragraph 12). At the Loyola Marymount University Abp. Paglia will be introduced by Prof. Roberto Dell’Oro, Director of the Center for Bioethics and Academics of the Pontifical Academy for Life.

On September 5 Abp. Paglia – and a delegation including Prof. Father Paolo Benanti, Prof. Father Carlo Casalone, Mons. Lucio Ruiz, Secretary of the Dicastery for Communications of the Vatican, Father Andrea Ciucci – will participate at meetings organized in Redmond with the Directors of Microsoft’s different departments for development and research, devoted to Artificial Intelligence and the common good.  In the afternoon Abp. Paglia will meet with Microsoft President Brad Smith in preparation of the 2020 Assembly of the Pontifical Academy for Life, which the Microsoft President will attend. This meeting follows President Smith’s visit to the Vatican on February 13, 2019. At the time, when he met Abp. Paglia and Pope Francis, President Smith confirmed Microsoft’s approach and commitment to ethical issues related to the development of artificial intelligence.

On September 8, the delegation of the Pontifical Academy for Life will move to New York State for a two-day meeting with IBM. On September 9, the delegation will be in New York City both to discuss ethics in the age of artificial intelligence and to meet with P-TECH leaders talking about the new educational model for younger generations. The next day, the program includes a visit to the IBM Thomas J. Watson Research Center in Yorktown Heights. Here, the delegation will have the opportunity to discuss the issues of innovation, the role of artificial intelligence applied to the great challenges of humanity and the principles, such as data responsibility, that link IBM to the use of new technologies. The session will be attended by Executive Vice President John E. Kelly, IBM Research Director Dario Gil and Chief Privacy Officer Christina Montgomery.

The Pontifical Academy for Life has invited IBM to send a delegation to the 2020 Assembly.