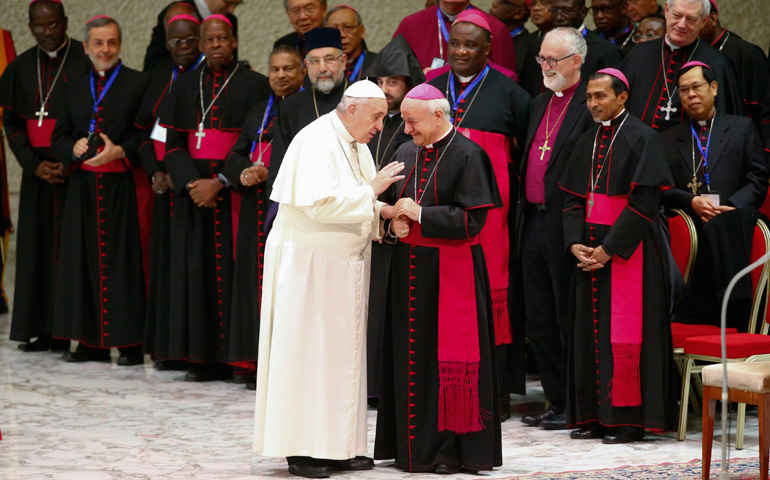 A new strategy. An ambitious project

“A new strategy. An ambitious project “. This is how Archbishop Vincenzo Paglia describes the mission of the Church in the defense of life and family in the time of Pope Francis.  There will be no giving up our historical struggles.  But neither will we have only permanent encampments on yesterdays’s battlefields.  In an interview with Alfa y Omega, the president of the Pontifical Academy for Life and Grand Chancellor of the John Paul II Institute explains the reasons for a new course that has sparked several controversies.

What does Pope Francis want from the reform of the Pontifical Academy for Life?

Today’s culture says that marriage, family, is anything you want it to be.  According to Pope Francis, the Church must address this culture seriously.  Part of that process is a reorganization of the offices of the Roman Curia.  The Academy, which was focused on bioethical issues, has to broaden its horizons.  It has to understand both life itself and the stages of life.  The reform means taking the measure of human life in all its complexity, in all its aspects and conditions, in the context of the relationship between man and creation.  We’re dealing with the “human ecology” that St, John Paul II and Benedict XVI spoke of. All this requires a redesign, an widening of perspectives, more areas of study, a renewal.

Is the Church retreating from the fight to defend the unborn?

No.  It is clear that there are strongly held positions on this questions and sometimes they have become ideological battles, extremely delicate and complex situations that have to be studied in detail.  Life in its fullest sense needs an approach that is more articulated than simply repeating a principle that is described as non-negotiable. No one wants to negotiate away anything, not at all.  I insist, however, that we need greater depth in our defense of life, greater effectiveness, and as many allies as possible. That means a new strategy, one that is much more complex and broad.  That will take us out into deep water, and it doesn’t lock us in to defensive positions; rather it makes us responsible for being leaven in today’s culture.  Our project is very ambitious; we aren’t stuck with defense, we want to change the world.  This requires close combat, blazing new trails, dusty roads, paths sometimes thorny.  The process must be managed, not just endured.  Battles are fought to be won, not lost.

Do you realize that, for many Catholics, what you say is considered as a reluctance to fight for Christian values?

My view is the exact opposite. I am so certain of the power of Christian values that I don’t feel a need to defend them, they defend themselves.  But with that approach not only do I not do away with them, I actually recognize that they have the power to touch even the hearts of those who do not believe.  I well know that we are living in an epoch of dramatic change, but that is precisely why we either save ourselves together or we won’t be saved at all.  I tell you that the Gospel has power, which is much more than an ideology.  I tell you that dialogue too has power, which is not just diplomacy.  It is much more.  This is a strategy that knows faith has no need of bunkers, faith is stronger than the Prince of this world.

Is this the reason for the recent changes in the Academy?  For example, the change in the of statutes, where the obligatory oath of the Academicians was removed.

I must clarify one thing about the revision of the statutes, I just implemented what had been decided before I was appointed.

Were they being worked on earlier?

Everything was finished before my appointment. The proposals were made by the previous administration.  I just received the material and presented it to the Pope. It was not Archbishop Paglia who changed everything.  All we did was broaden the membership to some representatives of other religions and denominations, and to some non-believers as well. All, however, must participate within a framework where life is respected.  For example, I did not propose any candidates who are “hawks.”  There might be nuanced differences in the positions of some members, but we are certain that no one will take a position  contrary to Church teaching.  By the way the former oath was only recommended, not obligatory, and the new statutes are much stronger in that regard.

Do the academicians know this?  Some appointments provoked heated controversy.

They know. Conditions in the world today are so serious that we must have as many scientists as possible who are “rowing in the same direction.”  That is our policy.  Some may be working at the edges, but all are on the same road.  Today humanity is at stake, today there is the temptation to be allowed to create life in the laboratory, to manipulate the universe.  These are gigantic challenges and they call for alliances that are as broad as possible.

Does that imply discarding the Church’s historical bioethics definitions.?

Not at all.  But if we limit ourselves to fighting only one or two battles, we’ll lose those as well as the others, I’m sure.

Are you working on a commission to reform the encyclical Humanae Vitae?

There’s no commission, that’s all been made up.  But in any event, I am convinced that one of the central themes of our time, which Blessed Paul VI foresaw, is generation.  What is the problem? There is a temptation to want to create life.  In China, only one child is allowed, but not everyone has one.  If someone can’t have children, he goes crazy.  Demographics are skewed because birth rates are low and life expectancies are increasing.  In these circumstances, it is shortsighted to center the question around a simple yes or no to birth control.  Today, babies are created in test tubes, wombs are offered for rent, gender theory is everywhere.  The risk is that, by only looking backward, we will lose the culture war.  How can we preach the timeless Gospel to the men of today, individualists who think they can control procreation?  This is the great challenge we face, and yet we compete with each other to see who is the most faithful to tradition.

What about the John Paul II Institute for Studies on Marriage and Family?  Will its name be changed?  Will it close?

Nonsense.  These are inaccurate reports, falsehoods told by people who refuse to understand.  Not only will it keep its name, it must be strengthened.  We want to expand it, give it international prestige.  We will enrich its courses, strengthen its academic reputation, and keep its name, John Paul II.  There can be no other course of action.

Do you think that there is a media campaign that is producing all this false information?

I am saddened that there are these accusations, falsehoods and detractions.  What I am saying is what we will do.  I have asked the Bishops Conferences to send students. There was a proposal to close the Australian Session, and I objected, calling another bishop to move it to a new diocese and keep it open.  Moreover, I also proposed opening Sessions in Africa that would study phenomena such as polygamy, which is of concern to African bishops, and other relevant questions.  The Bishops Conference of Mozambique wrote me because it wants to open a Session.  I would also like to have a Session in English-speaking Africa.  Indispensable too is strengthening the cultural level of the Institute at its main campus in Rome, so that the local Sessions can also raise their level and reflect, in a more detailed way, on contemporary world situations.

How do you answer those who question your commitment to defending life?

Some American commentators doubt that I defend life. I tell them, not only do I defend it, could I ever possibly be in favor or abortion?  Are we losing our minds?  My reply is why are they not opposed to the death penalty?  Likewise, in the last five months, there have been more than 6,500 gun-related homicides in the United States.  Does anyone talk about them? Is the life of these people, often young, worth less? Do we have to be quiet about them? Why do not we defend them? This is the accusation I level against people not defending life.  Let’s put everything on the table.  That’s what I’d like.

Charlie Gard: “Life should never be cut short” The dramatic case of the British infant Charlie Gard, whom his mother and father want to offer the possibility of life in the face of a fatal genetic disorder, has reached the Vatican.  Pope Francis said he is praying for them, hoping that their desire to be with and care for their baby until the end will not be ignored.  Meanwhile, the Courts seems inclined to keep the child in the hospital and disconnect the respirator that keeps him alive.

In an interview this week, Archbishop Paglia warned,  “Life must always be loved and always defended, never humiliated, never shortened; it must always be accompanied with affection within that alliance of love that should never be broken among doctor, patient, relatives, and friends as well.  Beware of entrusting to Courts those complex, unique, extreme situations where we come face to face with the mystery of death”!  “I find it repugnant to talk about ‘pulling the plug’ on a sick person.  Really, a person is never to be treated that way.”  He added, “I’m horrified to hear that Courts decide, horrified to hear that a patient is given ‘a little extra time.’  That’s crazy!  Life must be accompanied, loved, and the responsibility for decisions must remain at a collegial level, not taken by an outsider.”

Archbishop Vincenzo Paglia was  Born in Boville Ernica (Lazio, Italy) on April 21, 1945, Ordained a priest in 1970. He is general ecclesiastical assistant of the Community of Sant’Egidio. In June 2012, Pope Benedict XVI appointed him as president of the Pontifical Council for the Family.   He was chosen by Pope Francis in August 2016 to guide the reform of the Pontifical Academy for Life as president.  He is also Grand Chancellor of the Pontifical John Paul II Institute for Studies on Marriage and Family.