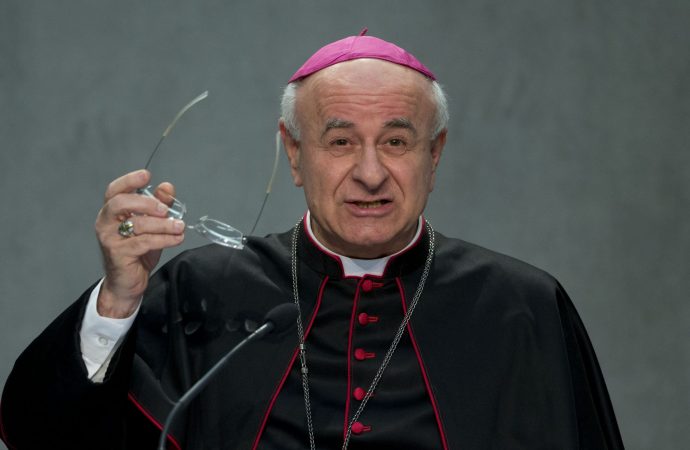 Dialogue is love, not compromise

ROME – Archbishop Vincenzo Paglia, appointed president of the Vatican’s Academy for Life (PAV) around this time last year, is a passionate man with a big mission and a sackful of energy and hope that easily spills out.

Entrusted by Pope Francis with taking the Church’s pro-life witness out on the road, breaking it out of its self-referential ghetto, the PAV’s task is “to witness to the Gospel of mercy and convince as many people as possible to live in that dimension,” he told me in Rome shortly after the consistory to create new cardinals.

The pope’s marching orders to him last year were clear. The field-hospital Church “realizes its mission of salvation and healing, precisely in the lives of individuals most threatened by the new culture of competition and disposal,” Francis said in the chirograph creating the new PAV.

That means being out on “all the human frontiers,” walking alongside humanity to help create “a more human humanity, according to the mercy of God and not according to violence and oppression,” is how Paglia interprets it.

The archbishop had liked a Crux article I had written defending the PAV’s appointment of the British Anglican ethicist, Rev. Nigel Biggar, who was recommended as a member of the Academy by the Archbishop of Canterbury, Justin Welby, primarily because of his work on euthanasia.

The appointment had scandalized some former PAV members because Biggar had once claimed in an interview to be in favor of reducing the UK’s legal abortion upper limit to 18 weeks. This was not, obviously, the Catholic position, although the bishops of England and Wales have been happy in the past to urge even 20 weeks (it is currently 24) as a stepping-stone to outlawing all abortion.

But the larger point I made was that Biggar was not there because he was a Catholic, but to help the Academy dialogue and create consensus beyond the Church’s boundaries (which is the purpose, after all, of a Vatican academy).

The article provoked various reactions, among them a critical one from the president of Human Life International, Father Shenan J. Boquet, who arguedin Crux that “honoring” Biggar with membership of the PAV created the impression “that the Church does not take its teaching against abortion as seriously as it once did.”

I was interested in Paglia’s response to this remarkable claim, but the archbishop preferred not to respond through me. Instead, we agreed, he would explain the PAV’s new strategy and vision and the important role non-Catholic members could play in promoting them.

Paglia, 72, has a vast, engaging smile and expansive hands that cause his green-inlaid pectoral cross to bounce up and down when he talks. The cross belonged to Archbishop Oscar Romero, the slain Salvadoran martyr, of whose sainthood cause, unblocked by Benedict XVI shortly before he resigned, he is the postulator.

Even though Paglia’s last Vatican job was president of the Pontifical Council for the Family, appointed by Benedict, putting Romero’s postulator in charge of the Academy for Life sent clear signals about what Francis saw as the weakness of the Vatican body, created in 1994 by St. Pope John Paul II to research and study bioethical issues.

Its narrow focus and endless squabbling between members meant that the PAV for many years epitomized the “self-referential” Church, creating a culture of ideological purity, even fanaticism, that was both unattractive and ineffective at influencing the wider world.

Now, says Paglia, the PAV aims to be missionary in outlook, seeking to tackle what he calls “the great frontiers of life” in collaboration with believers of other churches and faiths as well as non-believers.

He wants to broaden the witness. Being pro-life, Paglia says, certainly means being against abortion and euthanasia, but it means also combating the oppression of children. “And it also means being aware that in just six months in the United States 6,600 people died after being shot.”

(I checked the veracity of this figure. Indeed, some 13,286 people were killed in the U.S. by firearms in 2015, according to the Gun Violence Archive, and 26,819 people were injured. Remarkably, pro-life groups in the U.S. are almost entirely silent about this.)

Paglia is one of the early members and founders of the Rome-based Community of Sant’Egidio, which runs the “humanitarian corridors” bringing refugees safely into Europe from Iraq and Syria. Among its many famous campaigns is a worldwide bid to ban capital punishment.

That, I suggest, is also a pro-life issue, even if it is not considered “non-negotiable” for many of the groups that wave that banner.

This is, obviously, a rather richer and less politically circumscribed agenda than that of most pro-life groups.

Human Life International, for example, describes its mission as confronting the “evils of abortion, contraception, euthanasia/assisted suicide, and the redefinition of marriage,” but makes no mention of the small arms trade or the death penalty (there are close to 3,000 currently on death row), both of which Francis explicitly alluded to as life issues in his address to the U.S. Congress in September 2015.

“We have now the urgent task of broadening our vision,” confirms Paglia. “It would be a mistake to stop and read only the first chapter in a book of 20 chapters.”

But with limited resources, I object, surely you have to prioritize? What will the Academy try to work on first – perhaps Benedict’s insight, developed in Laudato Si, of a human ecology?

In fact, says Paglia, the PAV has already been working for some time – even before the current changes – on re-reading the early chapters of the Bible in the light of modern challenges. And he offers me what he calls a “first reflection.”

“When God creates humanity He doesn’t make an individual; humanity is already plural. He makes a man and a woman. The diversity is right there at the origin. Any attempt to simplify this is a betrayal of what is human.”

Therefore, he says, so-called “gender theory” represents a cultural step backwards: It is the inability to appreciate difference. Then there’s the fact, he adds, that God trusts the man and the woman with two great missions: To care for the environment as the home for all, and to create the social ties that go from the family to the city and the nation.

What the Academy feels called to work on, he says, is this great theme linking environment and generation. Paglia wants the Church to speak about such matters attractively, showing the integral inter-connectedness of life ethics – not just speaking out against what oppresses life, but pointing to what is beautiful.

He cites a homily of Romero’s during the funeral of a priest in which the Archbishop of San Salvador dwelt on the theme of giving up your life for others. For some, he said, this will mean actually spilling blood, as he did, for but almost everyone else it will still mean sacrificing your life, as a woman does when she gives birth to a child and raises it. She becomes a martyr to that child.

“This is how to talk in favor of life and against abortion,” Paglia says. “Not stuck in a fortress raising the flags of a few principles.”

The pope says as much in Amoris Laetitia #37, “that there is no sense in simply decrying present-day evils, as if this could change things.” People need to be shown truth, and helped to live it.

The canvas may be broad, but the PAV has an immediate focus in October: A major conference  on a topic that the Charlie Gard case (which came to public attention after I met Paglia) has highlighted, namely “accompanying life in the technological era.”

Among the challenges posed by technology is an ideology, transhumanism, that puts its faith in science as a means of perfecting human beings. In Laudato Si’, Francis calls this the “technocratic paradigm” – the severing of creation from its Creator, a mentality of extreme utilitarianism.

The issue of birth control, for example, is far broader than birth prevention. It’s about tackling the growing desire to manipulate birth: Test-tube babies, wombs for rent, and so on.  Paglia is keen to show that a baby in its mother’s womb is an irreplaceable, nine-month process of creating life: “It’s not like sticking yogurt in a refrigerator.”

PAV will also be tackling an issue that the Charlie Gard case has highlighted: End-of-life care. Together with institutions in Italy and elsewhere, Paglia has brought together religious leaders to sign an agreement on the importance of palliative care, which is the subject of a major meeting in January 2018.

It is vital for the PAV’s credibility that such efforts are the fruit of as broad a consensus as possible: hence the inclusion of two Jews, a Muslim, an Anglican and more than one nonbeliever in the Academy’s new line-up of members.

Paglia says they have chosen people who are all “lovers of life” even if they might not be on exactly the same page as the vast majority of the 50-odd members, many of whom, including household pro-life Catholic names, are reconfirmations rather than appointments.

But then, says Paglia, the Catholics don’t all agree on everything, either with each other or with him, and that’s all to the good. (On PAV’S homepage, for example, are four divergent members’ opinions on the Charlie Gard case.)

What the non-Catholics bring, explains PAV’s president, is credibility: The Academy is firstly an academic institution committed to scientific accuracy, and its statements are far more likely to influence the wider scientific community if they are the fruit of a consensus between believers and non-believers.

“It’s a strategic position,” says Paglia, “which obviously requires us to put diverse forces into play.”

He dismisses the alternative, defensive approach. The fact is, says Paglia, people have stopped listening; They no longer attack. “And we’re there with megaphones, speaking in the desert, while people go elsewhere.”

“If I may say so,” the archbishop adds wryly, “there is a certain way of defending life that doesn’t defend it.”

But he names no names and stresses that he is in dialogue with everyone. Dialogue is PAV’s primary task: To take Catholic life doctrine out on the road, to plug it into the great debates and issues of our time.

So what did he say to those who claimed that such an approach meant watering-down or compromising the truth?

“For me, it is the opposite,” says Paglia, who points to St. Francis of Assisi visiting the Sultan without swords or lances. His dialogue did not weaken his faith but made it stronger, more intelligent, easier to communicate.

“I’m not afraid,” says Paglia, “because for me dialogue is not about compromising. Dialogue is a way of loving.”

Consider Pentecost, the archbishop says, warming to his subject, hands expanding. “The miracle of Pentecost is that finally those doors that were closed out of fear of losing their identity, were opened, and the disciples multiplied!”

This is the new PAV program.

And it’s exciting, he concludes with a flourish, because “we are not slaves of the present. We are free to help create a more human future for all.”