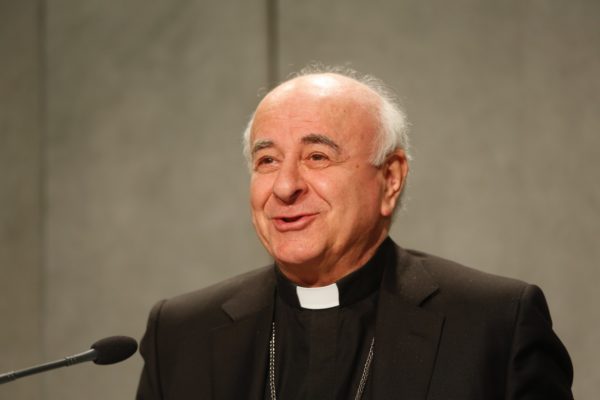 February 11, 2019, marks the twenty-fifth anniversary of the creation of the Pontifical Academy for Life.  On this occasion, Pope Francis wanted to commemorate the event with a letter, but not simply one that thanks the Academy and its Members for the work they have done in years past and encourages them to face with its future with renewed commitment.

The first words of the letter in Latin, Humana communitas, point out exactly where the Academy must focus its energy.  Even though we are devoting significant attention to questions related to the care for creation, humanity is faced with a new and far more profound problem with respect to the human family.  Our focus on creation as a “common home” has brought us to the borderlands where the future of the planet will be decided.  Today, particularly because of the extraordinary progress of technology, it is becoming ever more urgent to pay close attention to those who actually live in that “common home”—that is, the entire human family.   This is where the Pope wants attention to be directed, including the attention of the Academy for Life.  He is calling for a deeper understanding of “life” itself.  “Life” is not an abstract universal concept.  It is man in his history, it is the whole human family in the weave of its relationships.  The Pope highlights the weakening of the bonds that make up brotherhood.  “We must recognize that brotherhood remains the unkept promise of modernity.  The universal spirit of brotherhood that grows with reciprocal trust—such as that between peoples and nations that is the goal of modern citizenship—lately appears very much weakened.  The strengthening of brotherhood, which the adoration of God in spirit and truth generates among humans, is the new borderland of Christianity.”  This is a challenge that affects the entire planet. The weakening of brotherhood—whether we like it or not—contaminates all sciences—of man and of life.

The Pope’s Letter shows clearly that he is listening to the cries that arise from the suffering of peoples, and that he wants us to hear them too.  And he doesn’t stop with just hearing them, he asks what the Church in its mission will be doing about them.  He asks whether as believers we have made an adequate contribution to building up a humanism that is not simply limited to an ecclesial context, but rather is able to inspire, motivate and bring to the world a more fraternal civil society.  What are we to make of the obvious paradox where technoscience, with all its inventions, could allow all of humanity to live in much better conditions, while instead it feeds inequality and, at a deeper level, feeds “that melancholy where life cannot find a role that is up to the level of its spiritual yearning.”? (Num. 3)

The Letter is not limited to general reflections.  It reaches into the heart of a number of questions, and I would like to mention a few.

Bioethics. The process of globalization links life and health issues ever more closely with social and environmental concerns, this gives rise to questions concerns about the administration of justice.  Given the plurality of cultures and scientific disciplines, and their increasingly close interaction, it is necessary to devise operational criteria that can be universally shared and that have an effect on the formulation of national and international policies.  Human rights are in many respects the field on which these battles are fought, and it is thus necessary to interpret them correctly and, as Pope Benedict XVI would say, find the proper balance between rights and duties.

To this consideration must be added the so-called emergent and convergent technologies, namely nanotechnologies, biotechnologies, information technologies and cognitive sciences.  They broaden in an extraordinary way our ability to intervene on living matter, increasing the range of our responsibility.  This applies to therapies, but also to the possibility of increasing the potentialities of living organisms.  What is important to realize is that we are not concerned simply with making individual functions of an organism more efficient or with transferring them to artificial support.  We are dealing with creating completely new relationships with the world.  New information technology devices are increasingly findable in unexpected situations, including in our bodies, which are more and more exposed to technoscientific administrative decisions in the context of what is coming to be called “biopolitics.”

It is therefore necessary to participate in discussion and encourage broad participation by all those concerned so that the development and use of these extraordinary resources promotes the dignity of the person and the most universal good.  In short, we must beware of both human reductionism and of the even more dangerous complete elimination of what is human.  If not, a technocratic utopia opens the door to an empowerment we think we control but that in reality makes us its slaves.

The Pope calls on the Academy to enter into the territory of technology and to explore it with boldness and creativity, but also with careful discernment.  This means not having prefabricated answers deduced from a pre-determined abstract theory.  It means careful analysis of phenomena in their complexity and a serious process of interpretation in order to understand how the new findings of science and technology affect our humanity.  This must be followed by formulation of criteria for the promotion of the dignity of every person and of all the populations that inhabit our planet.  This is an undertaking that calls into play the moral conscience, understood not so much as a tool for the application of norms, but as the heart of the whole person, in whom the ethical and spiritual dimensions are in no way separate from each other.

Faith in the Resurrection encourages all of us, even non-believers, to never give up on or compromise the depth of our affections and ties.  Our shared life—confused and vulnerable as it can seem at times— must be what unites us in redeeming our humanity, and not a way that leads us into a world that is post-human..

The Pope’s letter was signed on the Solemnity of the Epiphany, an inspiring symbol.  The Gospel’s goal is an alliance among peoples, not a closing off of the community.  The Magi are a symbol of shared humanity and of the convergence of its wisdom around the eternally begotten Son of God, who becomes man and man’s destiny forever.  They are in a way academicians and ambassadors of humanity.  They scrutinize the signs of heaven and of life.  They escape Herod’s plot and are happy to give their riches to the Child of Bethlehem, the Lord of Heaven and of life.