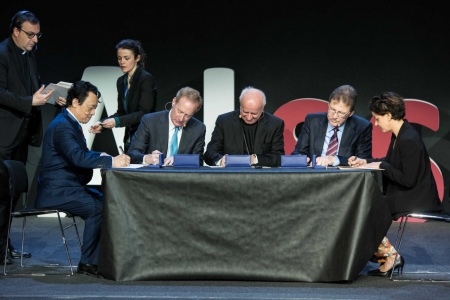 2020 General Assembly of The Pontifical Academy for Life. Call to Commitment address

Truly, we are experiencing the “change of an age,” as Pope Francis often reminds us, and we are more aware of that change than ever.  It is the reason why we are here today.

While humanity has already lived through many periods of radical transformation, we are faced today with a technological innovation that is particularly “disruptive” both in its pace, which is ever faster, and in its pervasiveness, as it touches directly the life of, not only individuals, but of society as well.

I’m referring to “emergent and convergent technologies” that allow us to intervene deeply within living matter, acting on the molecular basis of the human body.  These technologies lead us even to the question of human life itself, changing our understanding of it and opening the possibility of modifying it as well.  Pope Francis, in the letter he wrote to the Pontifical Academy for Life, Humana Communitas, urged us to broaden our horizons, to understand more deeply the meaning of the words “human life.”

Within this framework, we cannot avoid our responsibility for preventing disastrous outcomes.  How can we stop man from becoming merely technological and instead humanize technology?   How can we avoid being controlled by an “algo-cracy,” that is, by the power of algorithms?  Shouldn’t we develop a vision of society and of the future of our planet where man is the master and not a slave?

First of all, I think it is important to avoid giving doctrinal or authoritarian power to either government or private business interests.  But this avoidance is possible only if ethics is given a role, not only when a product is “built and in the box,” with nothing left to be done but to (try to) regulate its use.  Rather, ethics should have a role during the whole process of research and development.  In other words, it is not enough to try to regulate technological devices themselves, leaving to the end user the decision on their proper application based on abstract and generic considerations of respect for individual rights and dignity.  After the fact, experience tells us, recourse to ethical principles is almost useless.  Certainly, the principles that underlie the social teaching of the Church—such as dignity, justice, subsidiarity, and solidarity—are never to be abandoned.  The complexity, moreover, of the contemporary technological world guarantees that without the guidance these principles provide, fruitful dialogue among those who inhabit that world will be very difficult to establish.  We need an ethics that influences the criteria that underlie both algorithm design and the responsibilities of those who participate in the various stages of algorithm formulation.

In my opinion, ethics is called to accompany the entire production cycle of technological devices, starting with the choice of projects in which to invest.  This is possible if we identify an inter-disciplinary ethics model in which different skills play a role in each phase of product development—research, design, production, distribution, individual and entity use.  The goal in the new era of Artificial Intelligence is to ensure skilled and shared oversight of the processes that govern the interaction between humans and machines.

Careful however!  No one member of society can carry out this task alone.  Dialogue and cooperation among all parties is essential to ensure that the interest uniting them is that of keeping our “common home” safe and providing for peaceful coexistence within the entire “human family.”  Today, there is no field in which global vision can be ignored, particularly where technology is concerned.

This is what today’s meeting is all about.  Faced with the enormous challenges that technology presents, we are asked to take a qualitative leap toward a peaceful future for our planet.  We can learn from history and grasp an analogy with what happened after the Second World War.  People, after the dramatic experience of totalitarianisms that had trampled on the dignity of peoples and its expressions, took that qualitative moral leap forward and produced the Universal Declaration of Human Rights.  Dear friends, we must not wait for similar new devastation before we take action.  We can and must protect against it before it happens.  As a human family, we must reaffirm and promote pro-actively the right of all peoples to inhabit the earth with their diversity and in peace.

In light of these reflections, the Academy has begun a path of cooperation with a number of interlocutors:  academics, civil society and companies that produce these technologies.  The Call for Commitment that we will sign today is a first step.  Faced with changes brought about by technological innovation, we are called by our mission to respond.   We plan study and action in support of technological innovation that advances authentic human development and promotes the common good.  We intend to pursue the possibilities for a humanism adapted to the digital age.  In addition to representatives of the international academic world who have joined us, we have also found two companies, IBM and Microsoft, that share the Academy’s foundational principles.  In addition, participation by major governmental institutions, such as the European Parliament, represented by its President, and by an international agency like the United Nations Food and Agricultural Organization, in the person of its Secretary-General, give us confidence for the future.  The spirit of today’s Call for Commitment is not one of limitation in the number of participants, but rather of expansion.  We want to create a movement that grows and attracts others—like public entities, non-governmental organizations, industries, the service sector—to provide an ethical orientation in the development and use of technologies derived from Artificial Intelligence.  From this point of view, today’s first signatures on our Call for Commitment are just the beginning of something that is more urgent and more important than anything done in this area to date.  Each of us present here today is called on to become involved and to make our own personal contributions.  Thank you very much.